Reasons to be an Early Bird

Reasons to be an Early Bird

The first Sunday in May is celebrated around the world as International Dawn Chorus Day.  As there’s a Bank Holiday the following day in the UK, there’s no excuse for not rising early on Sunday 5th this year; you can have a lie in the next day instead!

There’s nothing quite like setting your alarm early and tiptoeing out into the world to hear the birds singing their hearts out before anyone else is awake. You don’t have to get up before it’s light- the chorus is at its best half an hour before to half an hour after sunrise- 5am should be about right this weekend.

The British dawn chorus is an exceptional cacophony of noise, and it serves a very important function, as male birds show off their territorial gains to potential mates in the area.  Instead of sleeping through it,pull on your dressing gown (a pretty floral one like our Fleur Dressing Gown would fit the bill) make an early cup of tea and sit in your garden to appreciate one of the great joys of spring. 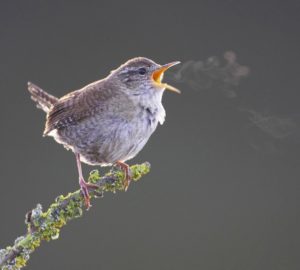 Here area few reasons the chorus is worth getting up for…

Not only can you hear it more clearly, but it’s a major reason why birds sing at daybreak- to reach potential mates. As well as a lack of background noise, reduced wind and air turbulence mean bird song at dawn is up to 20 times more effective than at midday.

According to research, birds in towns and cities have higher pitched calls than those in the country. This enables their calls to better bounce off the hard surfaces of urban areas.

Birds start singing at different times, and just like in an orchestra, there’s a set sequence. Robins, blackbirds and thrushes are first; they’re worm-eaters, hence the old saying about early birds and worms.  Their big eyes mean they can see better in the dark than other, smaller-eyed birds. These pre-dawn singers are joined by woodpigeons, wrens and warblers, while great tits, blue tits, sparrows and finches (who feed on later-rising insects) only add their voices when it’s light enough for them to see.

Birds can sing more than one note at a time

Most birds have a syrinx, which serves the same function as our human vocal cords. Unlike the larynx of mammals, it is located where the windpipe forks into the lungs. In birds like the song thrush, it can produce multiple tones at the same time, hence the complexity of sound in a single bird's song.

So, if you want to listen to the dawn chorus there’s no better time of year.  The birdsong will be best on days with fine, clear weather and little wind. It can be chilly early in the day, so remember to wear a warm pair of pyjamas, and perhaps some cosy socks, and enjoy this wonderful sound of spring!